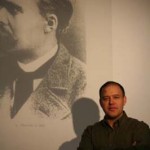 Brandon Konoval DMA (UBC) joined the Arts One Programme in 1999, and has been on faculty at the School of Music since 1998. He has particularly enjoyed the opportunity to work with students from a wide variety of backgrounds and with diverse interests, and who share his interest in continually seeking new ideas to explore.

At UBC, Dr. Konoval has long been associated with the development of distance learning initiatives, co-authoring a music appreciation course with noted Canadian pianist, Dr. Robert Silverman, and creating his own online introduction to music theory. As a pianist, Dr. Konoval has appeared on local and national television, on CBC Radio (Arts National and West Coast Performance) and in concert in Austria and Japan, and performed an all-Liszt benefit concert for the Stephen Straker Arts One Bursary fund.

He enjoys exploring our coastal mountains and the Canadian Rockies on foot and on ski, especially in the enthusiastic company of his son. In 2009, Dr. Konoval received a UBC Killam Teaching Prize.

Current Projects: I am concluding a study devoted to the relationship between mathematics, acoustics and music theory as developed in the late discourses of Vincenzo Galilei, in light of the development of early modern mathematical philosophy of nature. I continue to develop a project on utopian narrative and conjectural history, with particular attention to Plato and More, and Aristotle, Rousseau and Kant. I have begun work on 19th century bodily discipline as it evolved in the context of Romanticism and the figure of the virtuoso pianist, with particular reference to the relationship between ‘method’ and ascetic values and practices. I am currently developing an online introduction to music history and appreciation, with the support of UBC Open Learning and Technology.