Monster in the Mirror 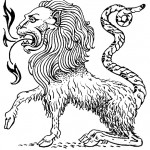 “. . . the serpent was more crafty than any other [creature] that the Lord God had made” — Genesis 3:1
“Those who fight with monsters should look to it that they themselves do not become monsters.” — Friedrich Nietzsche, Beyond Good and Evil

Even our concerted defensive efforts do not prevent the harrying of human culture by dark and dangerous forces. The most challenging of these forces, which trouble our dreams and fill our waking heads with lurid fantasies, are often given expression in literature and art through the image of monsters. These monsters — the strangers who cross our paths, the brutes among us — pose a standing challenge to complacency with our condition. When, in a flash of horrified recognition, we see ourselves in the alien, the sense of our humanity can even be called into question. The monstrous in our experience tests our sense of what we are. Grappling with it helps us to gain a firmer understanding of ourselves, even if that increased firmness consists in recognition that we are less than fully known to ourselves. It also works as a warning against giving in to our virtually hard-wired infatuation with perfection. The beguiling serpent in Eden, the Cyclops that Odysseus encounters in his journey of self-discovery, Grendel threatening the heroic Beowulf’s mead hall, the creature fashioned in Frankenstein’s laboratory who is denied love and companionship by his cold creator, the crooked Mr. Hyde dwarfed by Dr. Jekyll’s clothing though tailored to his internal measure: through these, and through other expressions of the monstrous and the sublime in philosophical thought, in factual documents and in fictional works, we shall examine how, through the ages, the monstrous has been our companion, and reflect upon what that companionship might mean.